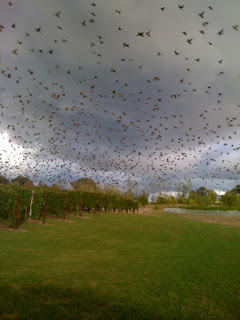 Problem: BIRD DAMAGE , it is a condition that exists with fruit production around the world. For decades growers have used various means to kill, repel or at least deter bird intrusion.

To date, most efforts have proven less than successful. These methods range from fake snakes and owls to reflective spinners and tapes. Sonic booms (from co2 and LP gas machines) have done little to deter birds. But these have disturbed the neighbors.


Various types of netting need buckets of money. Some are loose fitting nets draped over the crops. Here, wind movement can cause netting movement which allows birds access as the nets blow in the wind. And repeated netting removal for harvest is necessary as you need to harvest most crops several times during the season. 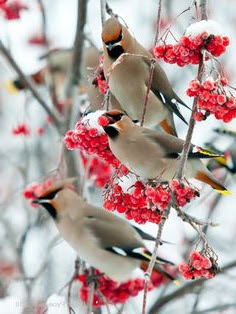 More permanent netting structures can be erected that are relatively successful. But, these sturdy structures can cost up to several thousand dollars per acre to install.


REMEDY: Fly Away Birdies has developed a new product that shows great promise for bird control.


Fly Away Birdies has developed this vibrating line. It produces a harmonic resonance sound when even the slightest breeze passes over its surface. Changes in the wind velocity causes the sound produced to change from high to low tones. The vibrations can be heard up to several hundred feet away. 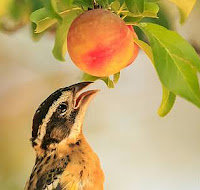 TRIAL PROTOCOL: in June 2013 one acre of two year old blackberries was trialed. The berries were grown on a "Trellis Growing Systems" rotating cross arm system. The trial was set out on ten, 400' rows, set on 12' centers. The Fly Away Birdies Humming Line was installed atop the trellis arms attached to 36" X 1/2" bamboo stakes, 30' apart, and 24 " above the tallest vegetation.
Installation was in mid June 2013 and remained in place until harvest was completed in early September. 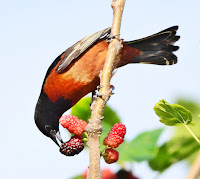 RESULTS: After careful observation, it was determined that the installation had given effective control up to 15' either side of the installed line. This translates into 3000 square feet of controlled area for each 100' of line installed.
In 2013, there was no visible damage to any of the four Arkansas blackberry varieties in the trial.
In the 2014 season, one line was installed early in the season over the Natchez variety, as they ripen first. Due to weather conditions the balance of the field ripened before the remainder of the  Fly Away Birdies Humming Line installation could be completed.
The field harvest manager began to see berry damage as the non-protected later varieties came into harvest. Immediately, the remainder of the field was installed and all bird damage ceased....again, there was complete bird control for the entire season.